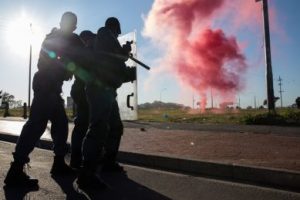 Police with smoke grenades trying to intimidate protesters and gang groups are doing nothing and just angering protesters, says a resident of the Bishop Lavis area in the Western Cape.

Then rubber bullets were used, and the gangs laughed at the police and fired back with live ammunition.

Then the army soldiers and the hope flames that gang violence will be stopped, only to discover that the violence is on the rise.

A resident of the area investigated the situation himself, finding that the army’s presence was of no value, and that the gangs were more cautious to the police than to the army members “who are uncertain about what they may and may not do. may not do ”.

That’s why some 200 women took to the streets to protest against the government’s inability to take control over the gangs.

According to statistics, Bishop Lavis is a crime Mecca where 144 murders were committed this year, an increase of more than 46%.