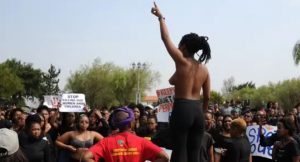 Students picket during Black Monday at CPUT Bellville Campus. Black Monday was declared at CPUT in support of victims and survivors of Gender-based violence.

Cape Town – Female students at the Cape Peninsula University of Technology (CPUT) are living in fear because of weak security on campuses.

This follows several attempts by students to address the matter with university authorities, including strike action three weeks ago.

The students are demanding tighter security, which includes the installation of CCTV cameras, visible patrols, the establishment of a tribunal and ombudsman to preside over gender-based violence (GBV) cases, proper vetting of staff during recruitment, and for the university to continue with investigations into rape cases – even if the cases are dropped by complainants.

Allegations of sexual harassment and rape, some cases involving staff and students, had been reported to authorities at the start of the year but no action had since been taken, students told Weekend Argus last week.

They claimed that when they asked authorities to take action and commit to fighting GBV on campuses, the university tried to intimidate student leaders into silence, and threatened to expel them or suspend them.

“We don’t come here to be raped or sexually harassed. We want the university to take a stand,” a visibly shaken student said.

Students said alleged perpetrators of GBV and sexual harassment had been “simply moved” to other residences while others enjoyed protection.

Although it was difficult to ascertain the number of rape incidents reported to authorities, it emerged that during the protest a student was raped at a campus in Tygerberg.

“Shortly after the incident, the victim bumped into the alleged rapist on campus. She froze and collapsed and was rushed to hospital,” a student said.

The university has installed a number of CCTV cameras at some campus residences in Bellville. “Males can easily walk in here,” said a student at a residence there without cameras.

The murder of UCT student Uyinene Mrwetyana has taken its toll on students. “It brought home the threat we are facing,” a student said.

At the Bellville campus, vehicles are searched only when entering, and pedestrians walk in without being stopped or having to sign a register.

CPUT spokesperson Lauren Kansley said management and the SRC had had many “engagements” on GBV, resulting in “mutually beneficial” outcomes. She would not say whether any student demands had been met or comment on the outcomes of the internal hearings into criminal cases.